Hiro’s first attempt to cross the Pacific began in Onahama, Fukushima.  This is also where we intend to conclude this second attempt that will begin in San Diego.   Why Onahama?  Why not San Diego’s sister city of Yokohama or some other major port?

The reason is that this is a voyage of hope and inspiration, an attempt to show that disability and adversity will not overcome the will to succeed.  It is natural to return to where the last voyage began and show our continued support for the people of  Onahama, Fukushima and Japan generally as people still work to overcome the effects of the tsunami and its aftermath.

Marina where we intend to make landfall 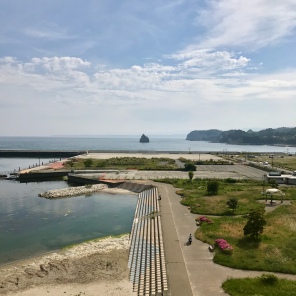 Looking south from marina in the direction from which we will be sailing.

Hiro with members of sailing club